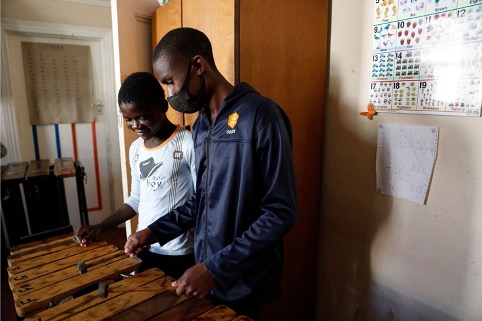 In a country increasingly afflicted by the climate crisis and a dramatic famine, many people find themselves living on the street. Even young people and children find themselves having to face the difficulties of not having a home. The story of Brandon and Tendai, welcomed in Harare’s House of Smiles, has a happy ending. Thanks to our operators, the life of these two street children has returned to being dignified and serene.

Without a dad since birth, Brandon had grown up in the custody of his mother and maternal grandmother. Over the years he had revealed himself to be a difficult boy, with many behavioral problems, so much so that his situation was also reported to the social services. Accused of often skipping school, of the theft of some objects and in particular of 190 dollars that were in the house, he ran away starting to live on alms on the street, like many other young people in his same situation.

The operators of CESVI meet fourteen-year-old Brandon, a month after his escape, and they immediately realize that he is a relatively new guy in that context. “The sooner you can reach a young person who has arrived on the road, the easier it is to obtain his family and social reintegration” – explains Wayne Foroko, a young social worker from the Casa del Sorriso. “The longer a young person stays on the road, the more he learns from other children not to share their personal information and in any case assumes behavioral models that are completely different from those accepted in society”. Brandon does not tell the operators the real reason he is away from home, but he passes on various information that allows him to reach his grandmother with a simple phone call. Since then, with the support of CESVI, Brandon’s happy reintegration into his family has been possible, so much so that even today the boy regularly attends both school and the psychological support sessions that continue to be offered to him by social services.

Like Brandon, Tendai had also run away from home of his own volition, due to the disagreements with the relatives who took care of him. From an early age, deprived of the life events of his biological parents, he was passed from one relative to another without his childhood ever finding either peace or love. “Once on the road, the days become weeks and the weeks become months, very quickly” – says Tendai in a written testimony he sent us. “Without even realizing it, you become a street child and begin to depend on the help of others. But the road is also violence and exploitation”. In his case, after 6 months of life on the street, it was enough for Enias Marama – the local manager of the House of Smile project – to ask him for the telephone contact of a relative, to fix things. With just one phone call, Marama brought the extended family, who for a long time had done nothing but fight over who should take care of the child, faced with their responsibilities. Tendai lived these years in his uncle’s house and at the turn of the age of 18 he is successfully completing his studies and planning to start his own foundation for the support of street children.

In over 15 years of activity, many street children have been saved with the care, attention and … phone calls from the operators of the House of Smile.

By continuing to stand by us, you will ensure a better future for many other guys like Brandon and Tendai.

Support CESVI in this and other initiatives!