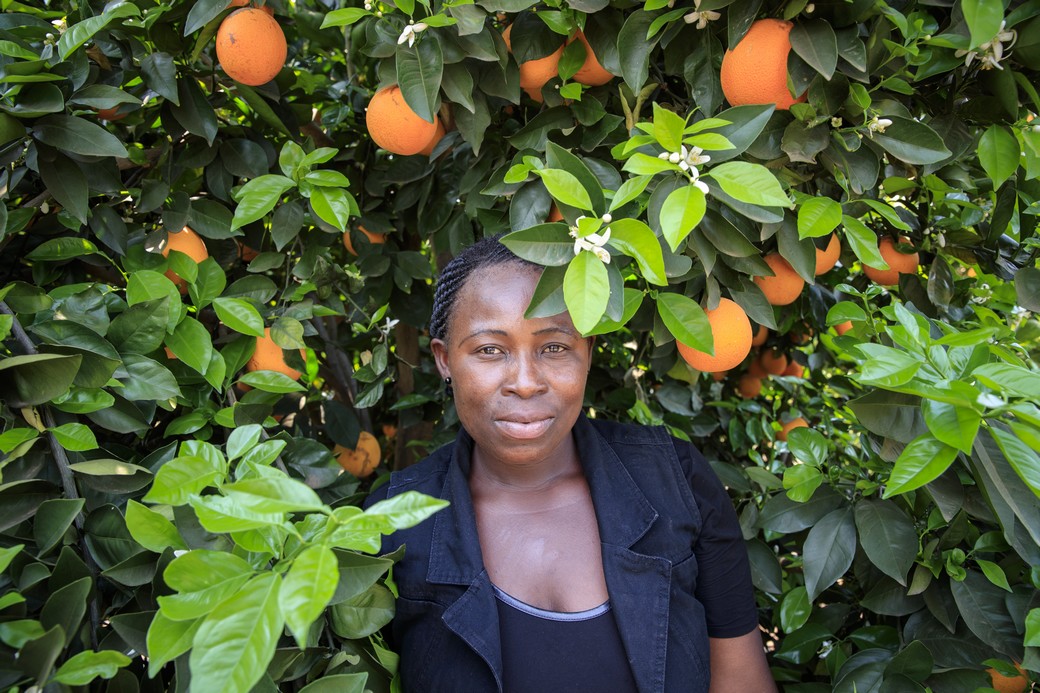 The“Shashe Citrus Orchard” project in Zimbabwe, has given the local community another solution other than migrating in search of economic and food security. Since 2011, the project has turned over 90 hectares of semi-desert land into a beautiful orchard, which employs more than 200 farmers. The irrigation scheme, renewed to better address the soil conditions, is managed by a Committee made up of members of the local community.

Seven years ago we bet on a project which has exceeded all expectations: Ellen, Shadreck and Hlengiwe’s stories prove our success.

Ellen is a 25-year-old single mother of 2 children aged 4 years old and 3 months. She joined the irrigation scheme from its very beginning, when she was only 18 years old. At that time, the farmers were setting up a demonstration plot where citrus cultivation would soon be tested. Since then, Ellen has made good progress: during the last season she managed to harvest over 7 tons of oranges, which will be sold to a juicing factory and to local markets.

“I realized that ‘Shashe Citrus Orchard’ to me is a lifelong project: when I will die my children will earn their living thanks to the orchard. That is the reason why we need to work on it as hard as we can. The orchard represents the future for our community.”

Shadreck is the chairperson of the Irrigation Management Committee. He’s proud of the scheme’s good functioning, which allows 50% saving of water and energy compared to the traditional methods used in the area. He is one of the pioneers of the project: he started clearing trees for the demonstration block in 2011, planting the major blocks in 2013 and eventually witnessing the first, long-awaited harvest in 2016. It’s not surprising that he cares so much about the orchard.

“At the beginning I didn’t trust the project, because I didn’t believe we as farmers could have a voice in the management process, but then I changed my mind and here I am on the driving seat of the Committee! I believe that the key success of the project is having listened to the community’s needs.” Thanks to the earnings from the sale of oranges, Shadreck is now able to feed his family and send his 4 children to school.

Hlengiwe is a 36-year-old mother of 4 children. During the project she had been trained to monitor possible pests and diseases. Thanks to what she learnt, she is now able to recognise a sick plant and knows how to take care of it. This makes her very proud, because she now can count on herself instead of relying on others.

Hlengiwe achieved also a special record: during the last season she got the biggest yield of the village, harvesting almost 8 tons of oranges. The harvest of sugar bean seed, grown as an intercrop between citrus trees, was good too. As a prize, she won a wheel barrow, which will be used for carrying the oranges. “Last year was a good one because all the farmers worked hard. We have a great responsibility toward our children, and we won’t back down.”

Links between hunger and forced migration are addressed in the 2018 Global Hunger Index. Find out more!