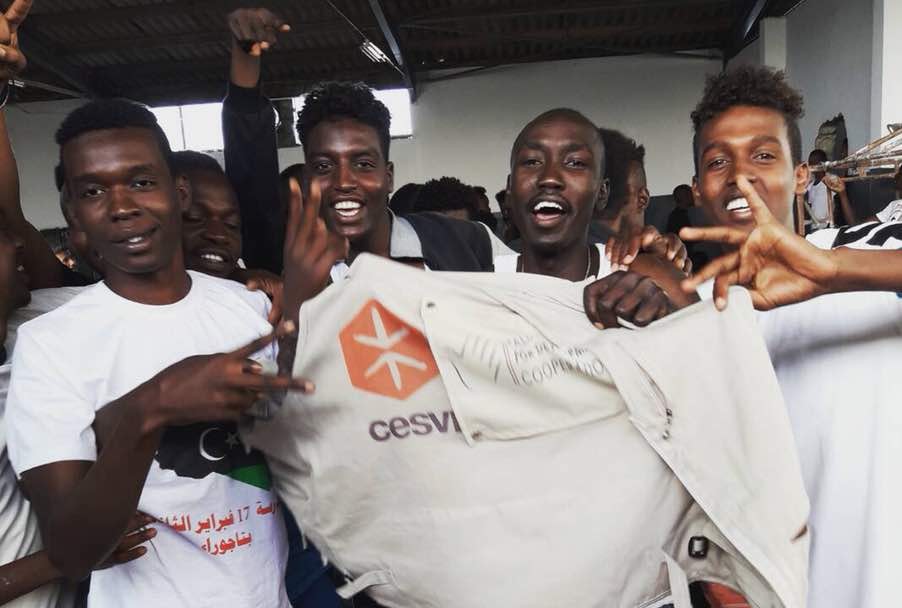 Kali’s and Bereket’s stories show how Cesvi works in Libyan Detention Centers to ensure protection and human rights to migrants and refugees, with special attention to most vulnerable people, thanks to the support of the Italian Cooperation for Development Agency (AICS).

Kali and Bereket are respectively 4 e 5 years old: they are the most vulnerable among the vulnerable people we work with. Through external referral systems we bring their situation to the attention of other actors and organizations who then advocate for their release to the appropriate authorities.

We asked Paola Toffetti, AICS Project Manager in Tripoli, to explain how the system works.

Q: Can you explain in detail what is a referral service? What different types of referral do we operate in Detention Centre in Libya?

A: The referral is a procedure we activate to provide a person – in this case, migrants in a Detention Centre – with the service he/she requires, based on a previous assessment of his or her needs.

In the centers we arrange the so-called “internal referral” when we identify cases of people in need of psychosocial support. In this case, we address the person to our psychologist in order to give her or him access to counselling activities.

If migrants need healthcare services, we refer them to other organizations working in the centers which are responsible for providing this kind of assistance.

Another type of intervention is put in place when, like Kali and Bereket, such person is an underage. In this case, we advocate for their release from the Detention Center. Depending on the nationality of the underage, we talk with UNHCR or IOM who then start putting pressures on the center authorities for obtaining the release.

The Libyan government recognizes the humanitarian protection status only to people from a few nationalities (Syrian, Iraqi, Palestinian, Somalian, Yemeni, Eritrean, South Sudanese, the Oromo ethnic group from Ethiopia and Sudanese from Darfur), not taking into consideration other vulnerability factors, such as the young age. This is the reason why obtaining the release for Bereket – the Eritrean child – was relatively easy, unlike what happened with Kali’s, the girl form Guinea Bissau. In the end her request was accepted too, because the competent UN agencies guaranteed her return home through the reunification with the father.

Finding an alternative to detention is not easy, but it’s important to keep working on it, especially when it involves vulnerable groups of people such as minors.

Q: Let’s start from the beginning: how do you identify cases which need a referral service?

A: When Cesvi’s staff visits the 3 centers* where the organization works in Tripoli, the first thing we do is establishing a first contact and interviewing the prisoners. During the interview the staff carries on a “vulnerability screening”, asking to the person main biographical data (such as age, nationality and language) and the reasons of his/her journey through Libya.

We do not ask direct questions on any traumatic events they may have experienced during the journey, but more generally we ask which problems have they faced. It’s a way to identify vulnerable people, i.e. those victims of torture or gender based violence, without having to ask tough or sensitive questions.

In fact, migrants themselves express, though not explicitly, their needs in terms of care. Once needs are identified, we move on to the second stage: the actual referral services.

Q: The project funded by AICS is about to end. What is its outcome: how many interviews and referrals have you conducted until now?

A: 60% of the 3 centers’ population has been interviewed up to June 2018 – that means 837 people in total. Considering the duration of the project – just 4 months until June –, this is really a good result.

32% of all people which have been interviewed is under 18 years old. We speak about 373 minors, the majority of which is unaccompanied (347 children).

We carried out 1,073 internal and 535 external referrals. This number doesn’t include referrals to medical NGOs in the centers, because those rely on a fast-track procedure with no need for written record.

Among the total numbers of referrals, 246 cases concern children.

Q: Let me ask a personal question: is this project giving you satisfaction? Is there any other activity you would like to put light on?

The job is definitely stimulant, and there is a positive mood and attitude among the staff. In addition to referral services, we organize recreational activities within the Detention Centers, such as sport or artistic activities and readings in different languages. All of them aim to improve, as much as it’s possible, migrants life within the structures.

We get really positive feedback from them: people detained in the centers need to stay busy to handle their situations better. We facilitate phone calls to families, because hearing the voice of someone close is a great comfort for detainees.

I believe that what we do really matters for people in Detention Centers: this is what make me go through all the difficulties and the complexities of the places we work in.