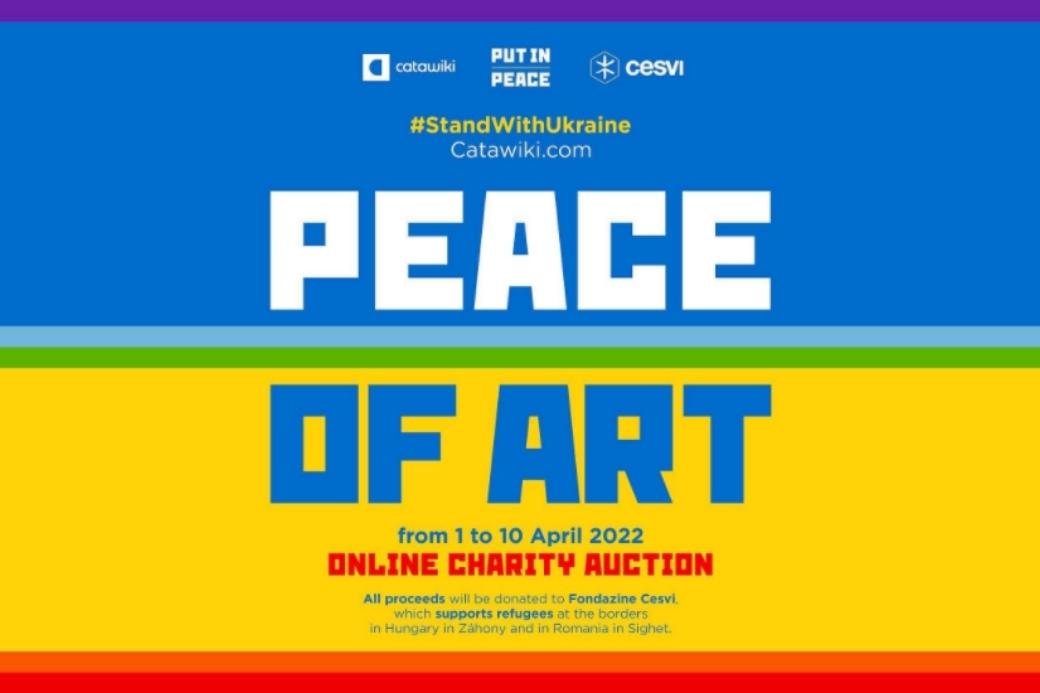 From social networks to a concrete help: as the conflict in Ukraine continues, the Instagram page @putinpeace which in going on to collect artworks and generosity from all over the world as a shout against the Russian invasion, launches from the 1st of April until the 13th, PEACE OF ART, an online charity auction in collaboration with Catawiki, in favour of Cesvi Foundation, a humanitarian organization committed to assisting people fleeing the war in border areas.

Since last February 25, at the outbreak of the conflict, many have joined @putinpeace among visual and video artists, photographers, art directors, a compact scream from different nations with a single warning: “The gallery will close when the war is over “.

The three founders (Fabrizio Spucches – Catania 1987, Andreana Ferri – Livorno 1992, Umberto Cofini – Padua 1993), immediately joined the social project with concrete actions: Spucches has in fact embarked on a journey of over two weeks in the war zones, meeting people, refugees, humanitarian associations, volunteers, collecting testimonies in the reception centers and on fleeing vehicles, welcoming them to the EU, offering to all of them help and support where is possible.

With the collected material he shared a day-by-day story via the @putinpeace page, allowing Ukrainian citizens not to feel alone and, for us, to participate in the drama that is unfolding through the eyes of the many people portrayed. The same for Umberto Cofini, who embarked on the journey with Francesco Perruccio.

Among the artists who have joined the project, invited by different curators, and who will donate the works for the auction: Pavlo Makov (the Ukrainian artist who will represent the National Pavilion at the Biennale of Venice) and Sergiy Zhadan, Oliviero Toscani, Jean-Charles De Castelbajac, TvBoy, Goldschmied & Chiari, Giorgio Galimberti, Lady Tarin, Orticanoodles, Charlotte Lartilleux, Gianni Lucchesi, Giuseppe Veneziano, Ludovica Bastianini, Merle Goll.

All of the proceeds of the PEACE OF ART auction will be donated to Cesvi Foundation, present in Hungary, in Záhony, and in Romania, in Sighetu Marmației, to support people fleeing the war and arriving at the borders, offering safe spaces where they guarantee protection, essential services, legal assistance, rest and enjoyment, especially for mothers, children, the elderly and people with disabilities. Furthermore, in collaboration with the European partners of Alliance2015, it continues to be present in Ukraine to assist the displaced by guaranteeing humanitarian aid and medical kits.

PUTINPEACE tries to do its part.
PUTINPEACE will close when the war is over and it can’t wait to close.
PUTINPEACE speaks on behalf of many of us because “Welcome to European Union”.

To share images, videos, anti-war photos and to support the project: @putinpeace #putinpeace

To participate in the PEACE OF ART charity auction from 1 to 13 April: www.catawiki.com