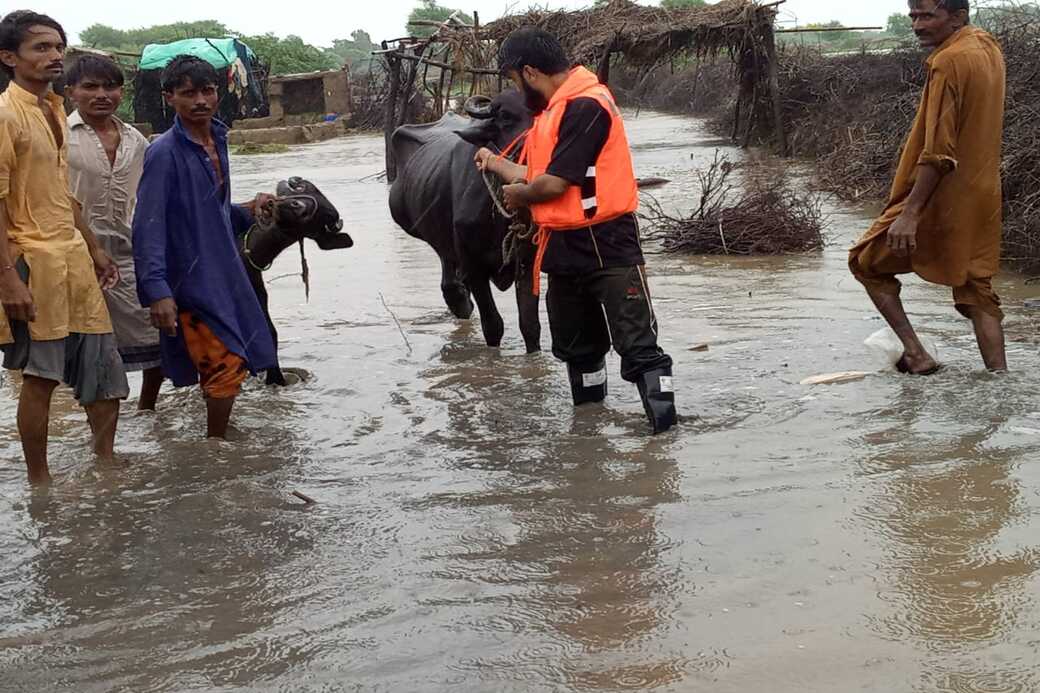 Since June 14, Pakistan has been experiencing one of the worst monsoon seasons in its history, 3 times – 5 times in the most affected areas – more intense than the average of the last 30 years.

According to the United Nations, 33 million people – including 16 million children – have been affected by the monsoon rains, which have brought devastating rains, floods and sudden landslides. To date, the authorities have registered over 1,200 victims and 4,900 injured and over a million homes have been destroyed or severely damaged. The country’s major rivers flooded, destroying homes, farms, roads, bridges, hospitals and schools – more than 17,500 educational establishments were damaged or completely razed.

To worsen the already serious humanitarian situation, the first cases of diarrhea and cholera were recorded, affecting an already extremely vulnerable population. In fact, before the floods, 40% of children in the country suffered from stunting due to chronic malnutrition.

The situation is rapidly escalating. The death of more than 733,000 livestock and the devastation of crops risk further worsening the food security of the population.

CESVI immediately mobilized, and we activated our staff in the country for first aid operations and to monitor the situation, assessing the most urgent needs of the most vulnerable population in order to structure targeted and effective humanitarian aid.

The emergency in Pakistan represents one of the most significant examples of the injustices of the climate crisis. According to the Global Climate Risk Index 2021, in the last 20 years, the country has been the eighth most affected in the world by the negative effects of climate change, despite being responsible for only 1% of global greenhouse gas emissions.

CESVI has been present in Pakistan since 2005, focusing its intervention precisely on preparing the population to face catastrophes and natural disasters, reaching over the years more than 2.5 million beneficiaries.
Since last year, CESVI has been intervening in Sindh – the province most affected by the floods – to help communities and local authorities improve their capacity to respond to disasters.

With the project “Strengthening Resilience of Populations Vulnerable to Recurrent Disasters and Emergencies in Thatta and Mirpurkhas, Sindh”, in collaboration with Action Contre la Faim and funded by ECHO – the General Direction for Civil Protection and Humanitarian Aid Operations of the European Union, CESVI currently operates in 50 villages, where 31,795 people have participated in training to improve their ability to respond to crises.

In addition, CESVI has implemented a river water monitoring system that has allowed 20,800 people to check the level of waterways and to prepare for the impact of floods once the alert threshold has been reached. Finally, in all 50 villages, since the start of the project, CESVI has provided emergency kits for first aid, search and rescue. During this year’s floods, the kits and the 600 workers trained by the project are playing a vital role in the first aid and rescue operations for the injured.

In this difficult context, due to the damage caused by the flood and an already critical situation, we work every day to support the population affected by this emergency, due to the climate crisis.

Our commitment does not stop. Continue to stand by us to make it possible.