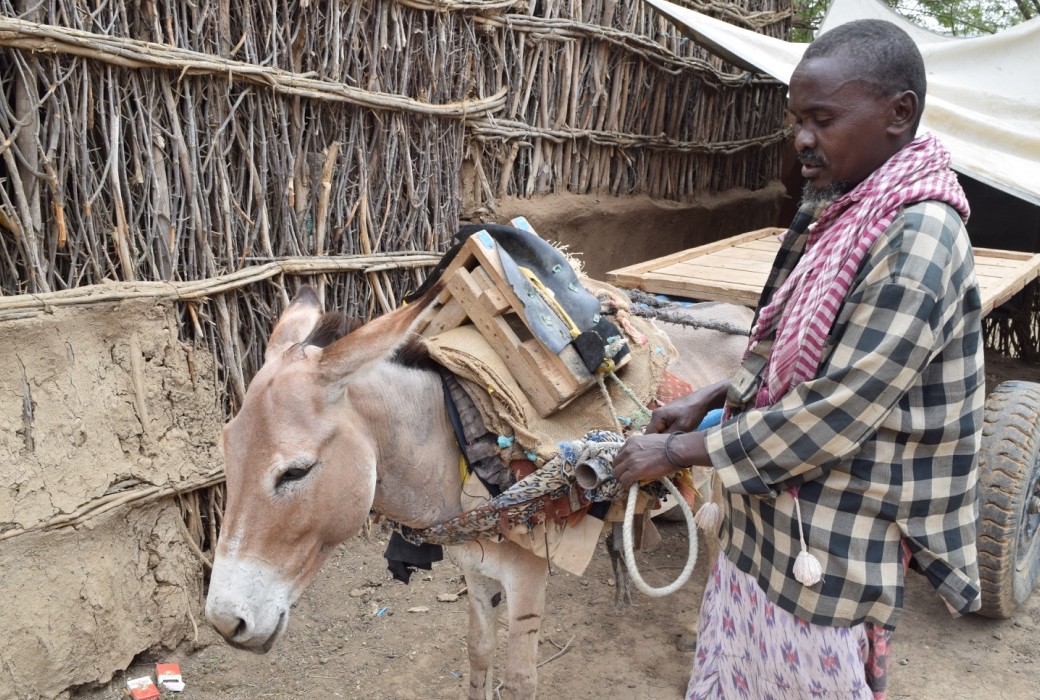 Throughout Somalia, Bantu communities have been subject to discrimination for centuries. In Garaash they have their own community, far away from the prejudice and marginalisation of the wider community. The small riverine village of Garaash is 20km far from Beledweyne town, and it is an old village entirely occupied by the Bantu minority groups who come from the region. Garash is home to 280 households. The self-imposed physical separation means that these communities need to be specifically targeted for assistance. In Garaash, DFID has funded several interventions through Cesvi and the BRCiS Consortium, among which unconditional cash transfers to 100 households, supply of 23 donkey carts and restocking for the most vulnerable agro-pastoral households.

Deeq Sahal was born and raised in Garaash. He’s a 40 years old father of eight children, and has been a farmer for his whole life. He and his family depend on the four hectares of farm they own. Like many of his neighbours, Deeq knows no other way of life: “I have never lived outside Garaash, this is my home where my parents were born, where I was raised and where my children are growing up”. Working in the fields, Deeq produces maize, onions, tomatoes, peppers, coriander and much more. Although the production capacity is low, it is enough to sustain the family and to sell the rest of the crop to Beledweyne. “The market doesn’t care about minority or majority clans: as long as we bring to the market good quality and competitive products, people will trade with us”, Deeq says.

Deeq was one of  the community members to be included in a 14-day cash for work program to rehabilitate the community canals. “Before we rehabilitated the canals they were out of order, now the farmers can use them. For the first time, we will able to farm during a drought period”.

In addition to the canal rehabilitation, cash for work focused on cleaning the main road which leads to the town, an initiative that opened the route to travel, especially in the rainy season. “Before cleaning, we used to get blocked into the village: when the thorn bushes grew too much, it was impossible to pass with our donkeys. During the rainy season it was even worse because the road was a mud path. Now we have covered the path with stones to prevent the rains from completely closing the road. This is helpful to facilitate trading between the village and the town. Without it, we would be able to produce but not to sell”.

Deeq is satisfied with what Cesvi has done for his community: “Thanks to the canals rehabilitation, we can eat what we produce. My children and my wife are healthy and they are rarely sick, we eat three meals a day and we are able to sustain our livestock as well”.

Despite this, he and his wife are getting more and more worried: “Rains have been poor for a few years now. We are not sure if we will be able to go on farming. We would like more initiatives like the cash for work: it gave us a sense of community, we worked together on initiatives that were good for everyone, and we also got paid for it”.

The range of initiatives carried out by Cesvi in Garaash contributed to build the community resilience. Also, they gave people ambition to go beyond their own farms and share a more sustainable communal living. Now Deeq, and many others like him in Garaash, wish they will be able to create job opportunities that benefit the entire community.