Of the 17 Sustainable Development Objectives, ratified by the United Nations following on from the MDGs of 2000, the fight against climate change stood at number 15.

Climate change appears in various forms: global warming, rainfall of abnormal frequency and intensity, melting of the icecaps, rising sea levels. Human activities, in particular the burning of coal, gas and oil which lead to increasing concentrations of greenhouse gasses, are the principle cause of these changes.

The results are floods, drought, heat waves, increasing number of storms and hurricanes and other extreme events which– besides putting lives at risk–cause serious economic and productive damage. All these phenomena influence millions of people, with greater effects on the poorer and more vulnerable populations, damaging agricultural production and threatening the ecosystem.

Cesvi is taking on the consequences of climate change, in particular El Niño, in various countries such as Somalia, Zimbabwe and Haiti, seeking to set up strategies for prevention and for reinforcing resilience. El  Niño is a global climatic phenomenon which reduces rainfall and, in the cyclone season, renders meteorological events more acute with devastating results.

For instance, in Somalia El Niño is causing, on one hand, heavy rains and floods along the rivers Juba and Shabelle and in the centre of Somalia and Puntland, with the risk of an increase in diseases like malaria, cholera and measles, and, on the other, a worsening of the drought conditions on the coast of Somaliland. The drought causes uncommon livestock migration from the dry zones to the more humid ones, a rise in the price of water and a strong growth in the indebtedness of the poorer families. Farmers and stock raisers are the ones most affected. Almost 308,000 children under 5 years old suffer from acute malnutrition and, of these, 56,000 are at risk of disease or death.

In the Hiram and Mudug regions Cesvi works to improve the resilience of the rural communities, with the setting up of an early warning system based on mobile telephony. Through workshops and meetings the communities learn to map the risks and adopt strategies for adapting to, and mitigating, climate change. We work with the authorities too so that they can reinforce their own coordination and response skills and train farmers and stockmen in the agricultural and stock raising practises best adapted to the new climatic context.

In Zimbabwe, where the number of people affected by food insecurity in rural areas has risen from 1.5 to 2.8 million, we are committed to diversification of agricultural production.
The southern areas in Zimbabwe, in particular, have had too little rainfall to guarantee the cultivation of the land. Even where it has been possible to cultivate, the crops have been exposed to excessive stress due to the dry weather and high temperatures. More than 16,000 head of livestock has died from drought and the poor condition of the pastures.

El Niño has caused intense drought in Haiti, which in turn has given rise to a severe food crisis. In the Southern Department we aim to reinforce the resilience of the populations hurt by climate change and malnutrition. Our program aims to respond to the food crisis in the short term and, meanwhile, to contribute in recreating the means of subsistence for the families in rural zones.

Taking action
against the drought

Rosemarie, 34 years old and 5 children, lives in the town of Aquin, one of the areas of Haiti most damaged by drought. Due to malnutrition Jean, her smallest child, is stunted compared with his age group.

Once Rosemarie and her partner were farmers and raised livestock, but for the last five years the rains have been drastically lower and now whatever they grow risks being lost. The drought has killed some of their stock.

The land is so dry that, to earn anything, they are forced to produce charcoal for sale. Charcoal is the main fuel source in Haiti and demand is flourishing. But this survival strategy, which represents a factor in the degradation of the land and of destroying the agricultural potential of the territory by eroding the soil – besides increasing the risk of floods and landslides – has been so exploited that the land has reached the bearable limit. There are few remaining plants, and even the roots are dug up for charcoal.

Cesvi has given Rosemarie and other vulnerable families in the area 150 dollars over three months to meet their most pressing food requirements. We are running an awareness program to make sure the resources be used appropriately and the family meals, however poor, be enough to cover the basic nutritional requirements. Meanwhile, we have started a program to reinforce the means of production with works on the hillsides to reduce erosion, increase forage crops, and with livestock management. 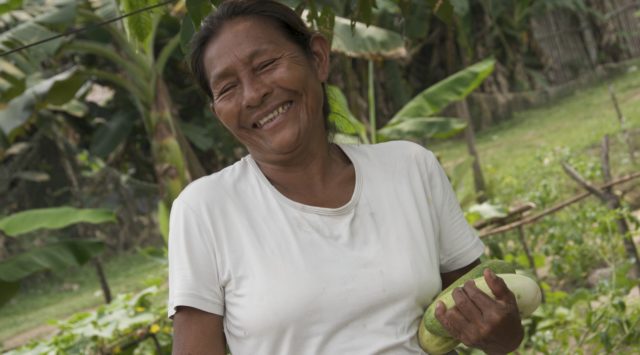